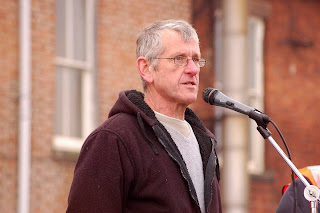 As a Trade Unionist & Socialists Against Cuts councillor I can fight more effectively in Meir North and across the city to provide ordinary working class people with a decent future.

People in Meir and elsewhere face the most savage attacks in living memory on our jobs, services, pay and conditions at work, pensions and benefits. The NHS, Royal Mail and other services are lined up for privatisation. A generation of young people face a nightmare future - forced to 'choose' between a lifetime of university debt or a low paid temporary job.

But why should we have to pay for economic crisis and massive debt created by big business, top bankers and successive governments. Why should we pay when bankers still pay themselves massive bonuses and big companies continue to rake in enormous profits.

We say make the rich pay instead. The richest one thousand people have a staggering £350 billion! We demand collection of the £120 billion Corporation Tax which is unpaid every year by big companies.

We say NO to the savage cuts supported by the Tories, Lib Dems, Labour Party and implemented by councils across Britain. We do not accept the lame argument of Stoke-on-Trent councillors that, “There is nothing we can do to stop government cuts”.

If elected I, as a Socialist Party member, and other TUSC councillors, will oppose all cuts. We have already heard the argument locally, “if we keep this swimming pool open we must close that children's centre”. That's why it's important we oppose ALL cuts to prevent government and local councils dividing opposition by trying to play off one campaigning group against another.

If elected we will oppose the cosy Labour, Tory, Lib-Dem and Independents Cuts Coalition which has run Stoke-on-Trent for years. Instead of sitting in rooms with these Cuts Councillors planning which jobs we can scrap and which services we can cut, close or privatise we will actively help to build the massive opposition to government cuts which is necessary.

We will propose a no cuts budget based on the NEEDS of Stoke-on-Trent people not what government ministers and local councillors think they can get away with. Liverpool city council did this in the 1980's and won £60 million back from Margaret Thatcher's government.


These local elections are more important than any in living memory. Firstly because we have to end this cycle of cuts, cuts and more cuts. Secondly because all those elected will be councillors for FOUR years. Stoke-on-Trent can't afford FOUR MORE YEARS OF CUTS.

In February all Labour, Tory, Lib Dem and some independent Stoke-on-Trent councillors voted for savage budget cuts of £36 million. Other councillors who didn't including BNP and Community Voice, proposed no alternative which effectively means they supported the cuts anyway.

originally posted up at PitsNPots
Posted by Matt at 12:38