Our Labour council carried out cuts to jobs & services under the last Labour government, this Tory-Lib Dem government and plan another £150 million worth of cuts over the next 5 or 6 six years WHOEVER wins the general election!


Dave Conway's City Independents manifesto has 36 pages and almost 4,000 words but nowhere does it say anything about fighting to stop endless cuts.


None of the other independent candidates say they will fight against all the cuts.


Ukip supports cuts and more privatisation. Even the Green Party, in power at Brighton carried out cuts.
A vote in May for any of these parties or independents guarantees relentless cuts until we have no council jobs or services left.


Only TUSC has a clear policy of fighting AGAINST CUTS. Only TUSC councillors will fight to protect jobs & services by building a citywide campaign to demand funds from the next government enabling us to implement a NEEDS BUDGET.

Be a TUSC candidate?


Leaflet for a TUSC candidate?


Get support for standing candidates in your union, workplace, community group? 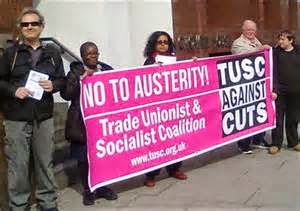